Poor sherry. For the latter half of the 20th century, this historically beloved fortified wine had been largely shoved aside, often relegated to the dustiest corner of the liquor cabinet behind an old bottle of Canadian whisky and stale vermouth of indeterminate age.

Thankfully, as is true with so many traditional forms food and drink that once seemed all but forgotten to popular culture, dry sherry increasingly has been finding a home at dinner tables once again.

And we couldn’t be happier about it. 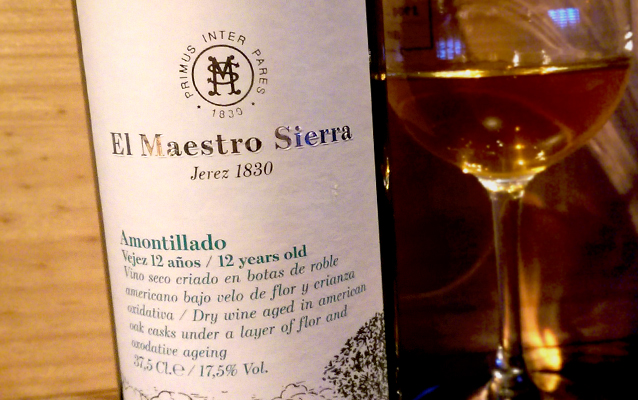 If I had a thousand sons, the first humane principle I would teach them should be, to forswear thin potations and to addict themselves to [sherry].

Dry sherry is tremendously versatile and food friendly. It’s been called an acquired taste, but so are a lot of the world’s great pleasures. And this one really demands food to be at its best, so what better place to feature it than a restaurant?

For the foreseeable future, we’re going to be using sherry in a few different ways, offering our guests a several opportunities to get re-acquainted with this remarkably versatile drink. We’re serving some delicious options by the glass, naturally. But if you order our new rhubarb tart, you’ll see that it’s plated with an amontillado sherry whipped cream. And we’ll be using amontillado in a cocktail (recipe below) to highlight its distinctive flavors in a completely different fashion as well.

Sherry is an Anglicization of the term Jerez, the name for a region at the southern tip of Spain where sherry wines are produced. While various inexpensive blended sherries became the most common in the US during the 20th century, there are a wide array of styles being produced by bodegas, ranging from light and crisp fino to syrupy dessert sherries.

Drier styles include fino, amontillado, and oloroso. Each is produced from the palomino grape, grown in soils so chalky that they’re practically white. The wines are fermented as any other but then graded by a winemaker who determines if the wine is more elegant and headed for a fino barrel or more robust and headed for a future as oloroso. For fino, the wine is fortified with a wine/brandy mix to raise the alcohol up to around 15% and left to develop a cap of active yeast called flor. As the wine ages, protected by the flor from oxygen, it acquires saline, savory qualities all while losing weight and viscosity as the flor eats up the nutrients in the wine. If the fino ages so long that the flor beings to die, oxygen enters the wine and turns the fino into amontillado. And finally, a wine that was never suitable for flor to begin with is fortified to a higher alcohol percentage and left to age, oxidizing to produce the less-dry oloroso.

PX and moscatel are grapes grown in less chalky soils, often harvested and dried on mats to concentrate the sugars before fermentation. Once fermented, some are fortified and others are not, but all are quite sweet and more suitable for a small apertif or dessert.

Also known for its use in some high end rums, the solera system of aging is perhaps most famous for its implementation in Jerez. When wine is removed from a barrel for bottling, the wine is replaced by wine from a younger barrel. That empty space is in turn filled from an even younger barrel. And so on. When a bottle is labelled with an age statement (e.g., 12 years), that number refers to the average age of the resulting wine in bottle.

We’re currently featuring an amontillado and an oloroso on the menu, though we have a second amontillado and a PX for those who really want to dive in and try several. As spring wears on, we’ll add a fino as well.

Additionally, we’re featuring a cocktail that puts amontillado’s nutty, savory flavors to the fore. If you enjoy it, consider making it at home using the recipe below. 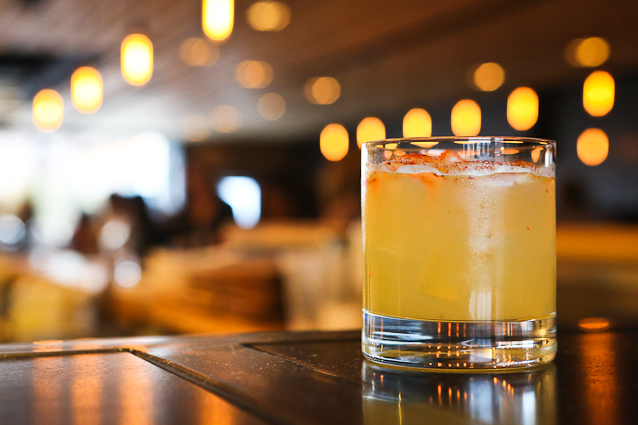 Shake the liquid ingredients with ice and double strain into a rocks glass filled with ice. Dust the top of the drink with the espellette pepper and serve with a smile. (* – There are plenty of good ways to make ginger syrup, including simply juicing ginger and combining with sugar to form a 1:1 ginger simple syrup.)

And remember: Whether you drink it with us or elsewhere, drink more sherry!