We were fortunate, not to mention honored, to get some mentions in the national media alongside a number of our friends over the past week.

The Wall Street Journal’s Off Duty section came to town for a whirlwind weekend through Detroit and mentioned us as part of their ideal itinerary. Always a treat to be recognized, but it’s both fun and gratifying to be mentioned alongside other great restaurants and some of our favorite things to do. The “long weekend” format made it a tight list despite the diverse set of things the author recommended, and it’s nice to still find ourselves on some of these now that we’re almost five years old. You’ll need a subscription to give it a read.

A few days later, Forbes published a similar roundup that’s a more traditional rundown of a lot of restaurants in the greater downtown area. Again, it’s hard to argue with many of their recommendations, and the list is accessible to the public.

Anyhow, definitely some nice attention for a number of restaurants and attractions in town.

Among the many “ranking” websites out there, none is so hyper-focused on food as Opinionated About Dining (OAD). Each year, the site publishes lists of restaurants that have been reviewed by its users, but the users’ votes carry more weight if the user is an experienced diner who has been to top restaurants throughout the world.

Lo and behold, we were pleasantly surprised to find ourselves sitting on the list of top North American Gourmet Casual restaurants, putting us in the company of Osteria Mozza, AOC, Walrus & Carpenter, Woodberry Kitchen, and other top restaurants around the continent that we love. A genuine honor to be in the same conversation.

Congrats to Lena and Other Good News

We’re delighted to announce that Selden Standard pastry chef Lena Sareini was named a semi-finalist for the prestigious James Beard Rising Star award, given to those under 30 making waves in the culinary world.

And recently, The Washington Post did a travel piece on dining in Detroit, and we’re featured alongside Dime Store and our dear friends at Supino. Naturally, they finished off their meal with Lena’s chocolate halawa (below). 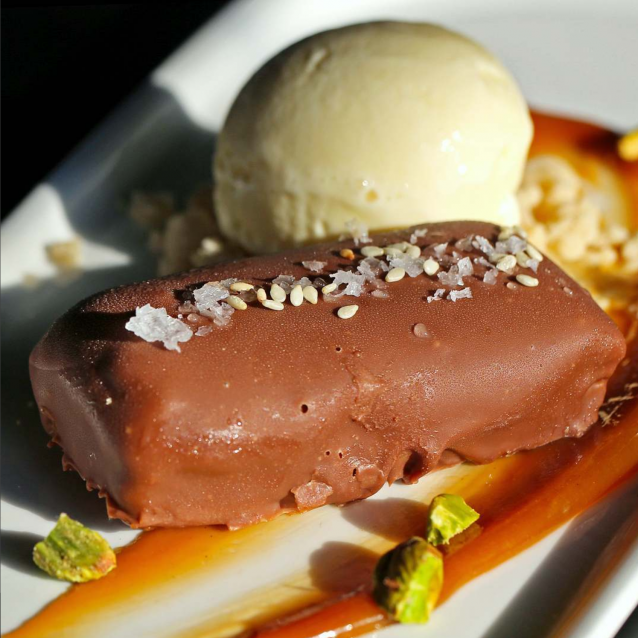 2016 Restaurant of the Year 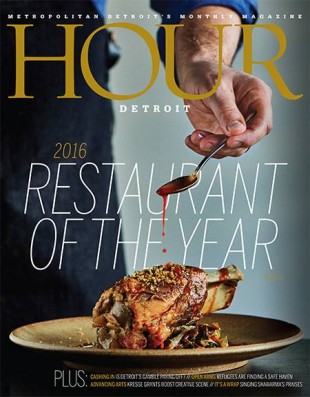 Writing that “Selden Standard has become the most notable casual high-end restaurant in the city,” Hour Detroit magazine has just named us 2016 Restaurant of the Year. It’s a tremendous honor – and the capstone to a very exciting week during which Chef Andy was also named a semi-finalist for the 2016 James Beard awards.

The Hour article makes mention of our staff, referring to the “choreography” between the front of house and the kitchen. That’s really where any success we’ve had over the past year begins: It’s a talented, dedicated group of 75 individuals who enjoy their work, and we’re so thankful that they’ve chosen to be a part of this team. We’re grateful, too, for our friends and guests who have supported us and challenged us to be better.

This is the second year in a row now that we’ve had the great fortune to receive an award of this kind, and we’ll keep working hard toward offering high quality food, drink, and service. Cheers!

We were thrilled to see this morning that Chef Andy has been named a James Beard semi-finalist as Best Chef: Great Lakes. He joins a few other great Michigan chefs receiving accolades from the Beard Foundation: Chef Nick at Forest for the same award; Chef Garrett Lipar at Marais for Rising Star; and Mabel Gray, headed by good friend James Rigato, for Best New Restaurant. This is the second year in a row that Andy has received this honor.

Swiss-based Mirus magazine visited Midtown last year, pointing their cameras at the businesses, artists, and leaders that make up the community. Selden Standard was lucky enough to be a part of their thorough examination of our neighborhood. The magazine’s staff assembled 100 pages of beautiful photography and compelling stories about many of the people and places here. 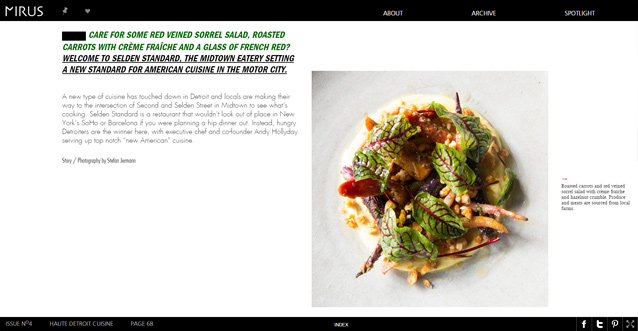 If you care to visit the earlier issues, there are some pretty interesting pieces on other cities as well. Definitely worth a read.

The National Media Comes to Town

We’ve had the good fortune to be a part of a recent spate of national articles highlighting, among other things, the Detroit food scene. If you’re interested, give them a read:

Chef Takashi, owner of Slurping Turtle in Chicago/Ann Arbor, recently hosted a ramen battle charity benefit at his Ann Arbor location. As the Detroit News reported, Chef Andy won the battle with a chicken ramen based on chickens, hens, and eggs from Salomon Gardens, and the $2,000 prize goes to Cass Community Social Services.

Andy’s recipe and an interview with Takashi are available online at the Channel 7 website.

We were also fortunate enough to be included in a summary from USA Today of new businesses opening in Detroit.

Finally, WDIV re-visited a story they did last year about Andy as well as our good friends Marc (Wright & Co) and Dave (Supino, La Rondinella). You can watch the video clip on the ClickOnDetroit website.

We’ve been fortunate enough to garner mentions in a wide array of publications over the past month or two. Among the highlights:

Thanks so much for the continued support!

2015 Restaurant of the Year

Selden Standard is the Detroit Free Press restaurant of the year! We’ll keep doing our best to earn that honor every day. But in the meantime, thank you to all our customers, all the other new restaurants helping to build our great dining scene, everyone who has supported us, and especially all our colleagues here at the restaurant — a talented, dedicated crew of great people.