We were fortunate, not to mention honored, to get some mentions in the national media alongside a number of our friends over the past week.

The Wall Street Journal’s Off Duty section came to town for a whirlwind weekend through Detroit and mentioned us as part of their ideal itinerary. Always a treat to be recognized, but it’s both fun and gratifying to be mentioned alongside other great restaurants and some of our favorite things to do. The “long weekend” format made it a tight list despite the diverse set of things the author recommended, and it’s nice to still find ourselves on some of these now that we’re almost five years old. You’ll need a subscription to give it a read.

A few days later, Forbes published a similar roundup that’s a more traditional rundown of a lot of restaurants in the greater downtown area. Again, it’s hard to argue with many of their recommendations, and the list is accessible to the public.

Anyhow, definitely some nice attention for a number of restaurants and attractions in town.

More evocative of an evil genius’ hidden lair than agriturismo, Edi Kante’s winery is almost as notable for its own construction as for the stunning wines produced therein. We’ve always enjoyed the fruits of his labor, having poured his Vitovska by the glass previously. But earlier this year, we had the opportunity to visit Kante — and to witness firsthand the thought and energy that this mad genius has put into his facility is breathtaking.

Open fire, his own colorful artwork, and hundreds of visitors’ messages scrawled across the walls brighten the tasting room he has constructed in his single-story ranch in the woods. It isn’t the house that’s so remarkable though. It’s what lies underneath.

Walk down the stairs toward what is ostensibly a basement cellar, and a wave of cool, damp air presents itself like a wall. No ordinary winery, Kante’s is sculpted from the bedrock, forming three circular bunkers stacked atop one another, each with its own purpose. First, his steel tanks where he ferments his Vitovska, Malvasia, Sauvignon Blanc, et al. Then, after another descent, his barrel room, laid out in perfect symmetry like some sort of Wight Walker shrine from Game of Thrones, where he ages each of his wines. Finally, the third level down serves as a bottle cellar where wines are stored until release — though it might be more accurate to call it a stasis chamber. We had the pleasure to taste a sparkling rose from 2010 that was impossibly fresh.

Only a kilometer from the Slovenian border, Kante’s limestone chambers are indicative of the ubiquitous grey limestone of the Carso district of Friuli. Near Trieste, it’s bordered by Adriatic Sea to the south, the Alps to the north, the hills of Collio to the west, and the Balkan peninsula to the east. Another winemaker described Carso to us as “another planet.” It’s quite cool at night, let alone 50 feet beneath the ground in his man made caverns. The wines are likewise taught, fresh, and minerally.

Being able to taste them all side-by-side for the first time was eye-opening, even for a producer we’ve known and admired. More of his wines will be coming to Selden Standard over the coming year, but for now, we’re delighted to be serving his Sauvignon Blanc.

French grapes might seem like an odd choice for northeastern Italy, but Sauvignon Blanc has been grown here for well over a century. Some legends claiming it was smuggled over in bouquets of flowers destined for a lord’s lover. Regardless, it turns out to be a natural fit for not only Carso but elsewhere in Friuli.

As with his other wines, this spends a year in old barrels and 6 months in a stainless tank before bottling. Whether it’s the limestone and clay in which it grows or the cool temperatures in which it ages, this is an uncommonly elegant, lithe Sauvignon Blanc with a crisp, restrained saline profile. With a little time, it seems to gain texture and soft, pretty citrus flower aromatics. There’s none of the aggressive grapefruit or vegetal notes of many Sauvignon Blancs – but it certainly retains the freshness. Grab a glass and a half dozen sweet-salty oysters and life may feel complete.

Last winter, we hosted local importer and distributor Chip Delsener, owner of AHD Vintners, for a delicious, informative Vega Sicilia dinner. But as anyone who works with Chip’s company can tell you, he is known widely both in Michigan and in Bordeaux for being this state’s premier importer of Bordeaux wines. So we’re excited to have him back to present a selection of Bordeaux alongside Andy’s food.

The event takes place on Wednesday, November 28, at 6:30pm. This five-course dinner is a ticketed event at $150 per person, including tax and gratuity.

Buy tickets to the Bordeaux Dinner (via Resy) 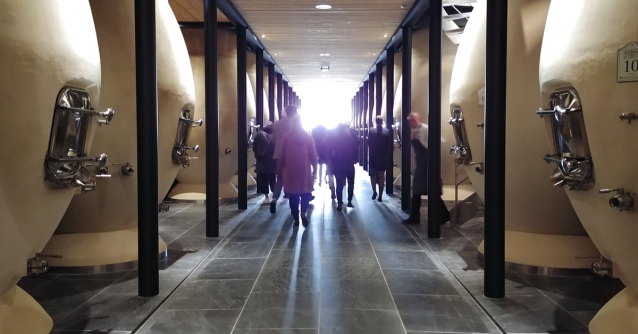 Bordeaux needs little introduction to many wine lovers. It’s widely consumed and written about. While the popular press does tend to focus on a handful of big names and luxury brands, the sheer scope of the region is even more staggering than many realize: From corporate-owned behemoths to small biodynamic farmers, big cabs to lush merlot, dry whites to sticky dessert wines, it’s a treasure trove of great producers, great stories, and great wines. Naturally, we’ll be showcasing a range of those regions, styles, and grapes.

Tickets are non-refundable, offered on a first come-first served basis, and are only available via our online reservations site. Price includes tax and gratuity. While we are happy to accommodate allergies and dietary restrictions, we kindly request that you let us know upon booking so we can plan accordingly.

Known principally for Barolo and Barbaresco, the wines of Piedmont are uncommonly diverse (and delicious). To take us on a “tour” of the area, we welcome Cameron Abbott of boutique importer The Piedmont Guy for a dinner presenting a selection of Piedmontese wines.

We’ll feature a wide assortment – from dry sparklers and whites to a series of Nebbiolo-based wines – including a side-by-side comparison of two single vineyard Barbarescos as well as a Barolo from the lauded 2013 vintage.

And of course, Chef Andy will prepare a five-course meal to accompany the wines.

Held on Wednesday, November 14, at 6:30pm, the dinner is a ticketed event at $100 per person, which includes tax and gratuity.

Buy tickets to the Piedmont Dinner (via Resy) 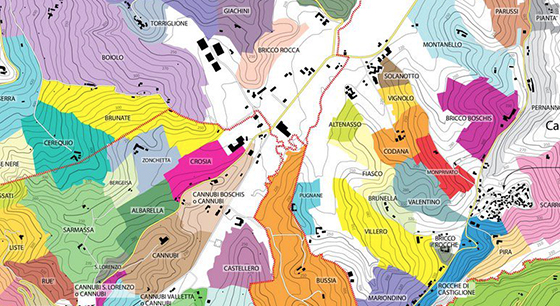 True to its name, The Piedmont Guy specializes in the many wines of Piedmont. While Barolo and Barbaresco are justifiably revered, the diversity of terroir and grapes make it one of the most exciting areas for buying, studying, and of course, drinking wines. And The Piedmont Guy is among the top importers in the country for seeking out exemplary family owned properties throughout the entire area. Their wines have been a recurring feature on our list for a few years now, and we’re excited to be able to present some of them in this way.

Tickets are only available online on a first-come, first-served basis.

We’re delighted to host Haus Alpenz founder Eric Seed for a dinner featuring an assortment of exquisite Madeira wines from producer Henriques & Henriques. Inspired by fall ingredients and his recent travels to Portugal, Chef Andy will prepare a five-course meal to accompany them.

Held on Wednesday October 24 at 6:30pm, the ticketed dinner will cost $100 per person, which includes tax and gratuity. We managed to pry a draft of the menu out of Andy, and it looks pretty exciting (see below). 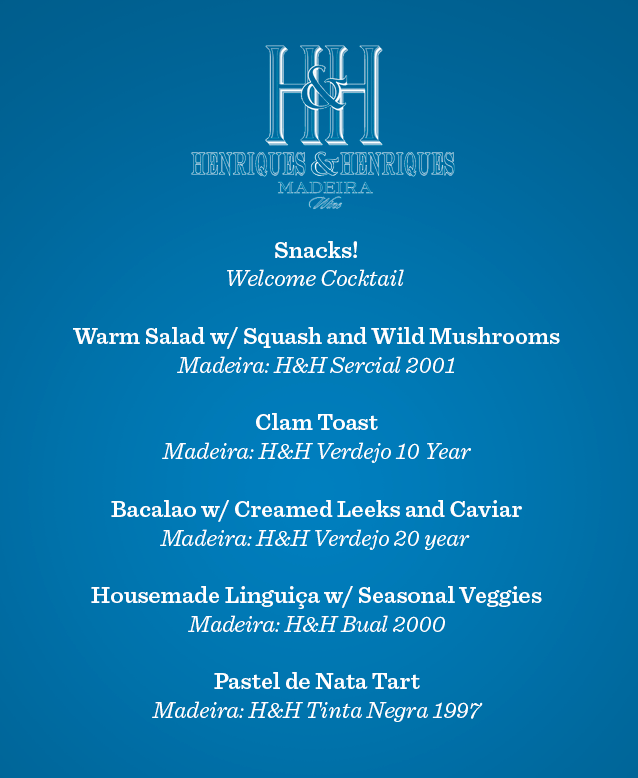 As an importer, Haus Alpenz is among the companies most easily associated with the resurrection of interest in previously cherished products like vermouth, amaro, and, of course, Madeira. While many today associate Madeira with cooking wine or the back of a grandparent’s liquor cabinet, it has been a cherished style of wine for most of its 500-year history – perhaps most famously used to toast the signing of the Declaration of Independence.

If you’re new to Madeira, Wine Folly has a good introductory primer. But in short, it’s a long-lived, unique, delicious drink that happens to be perfect for a fall meal. 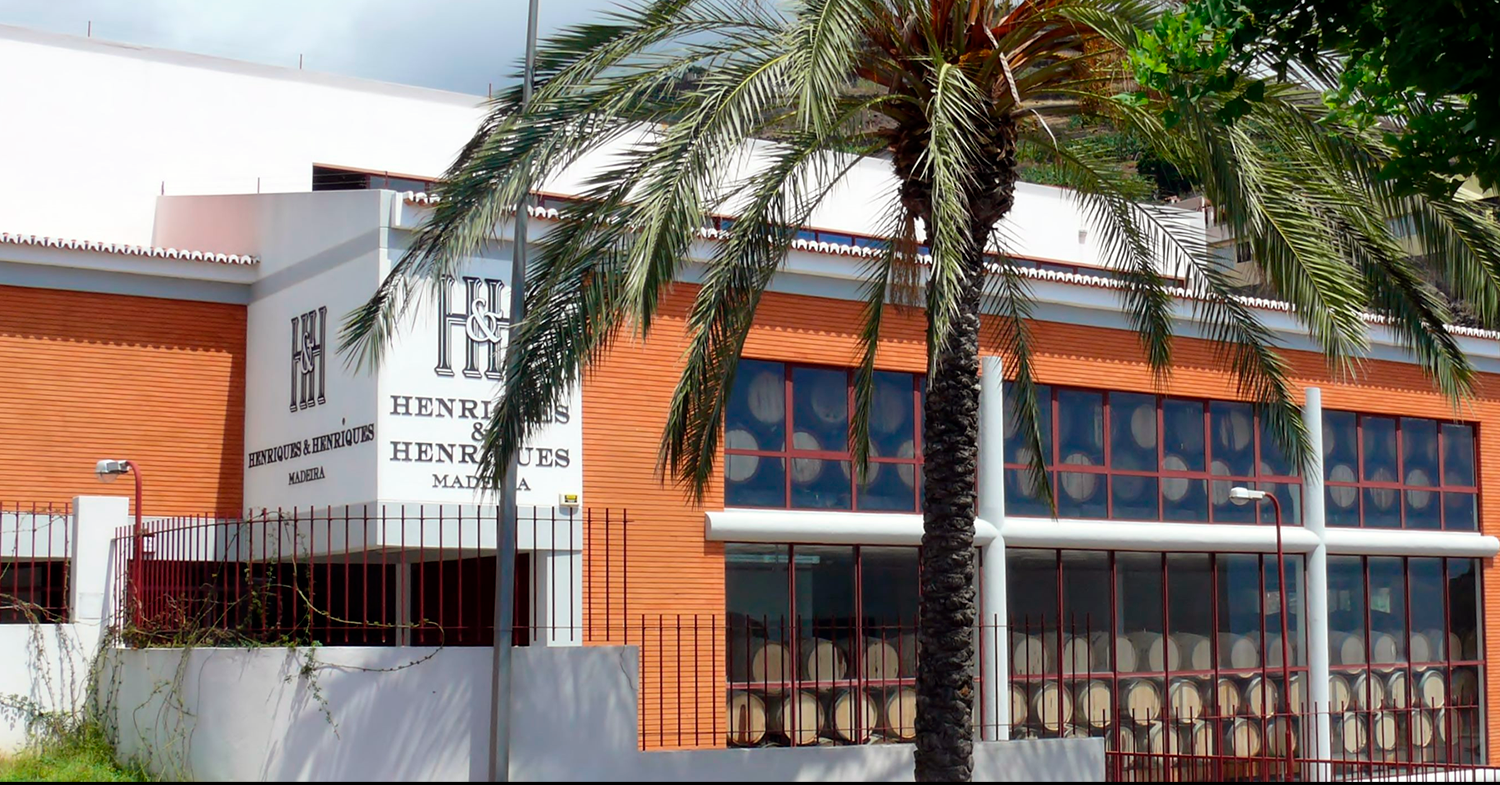 For the dinner, we’ll feature a number of products from Henriques & Henriques – from dry wines to single vintage to dessert-oriented styles – and Eric will be on hand to walk us through these underappreciated treats.

Tickets are non-refundable, offered on a first come-first served basis, and are only available online. Price includes tax and gratuity. While we are happy to accommodate allergies and dietary restrictions, we kindly request that you let us know upon booking so we can plan accordingly.